In this project a mobile, camera and image-based system is to be developed that allows planners to compare, document and inspect multi-scale 3D building models and construction plans on-site and during the building phase. Beyond that the system is supposed to be used in the facility management to overlay 3D models with camera images of a mobile device. 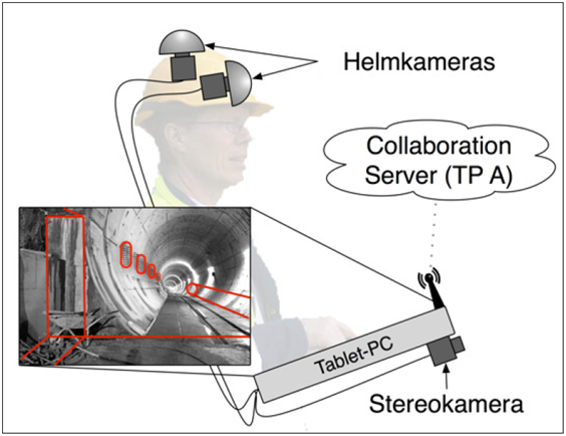 During the first period of the project a camera system was materialized and calibrated. It is, together with a tablet PC, part of the mobile system that is supposed to allow planners to compare and visualize construction plans and alternatives on-site and in his office.

System design and calibration: At the beginning a prototype of a helmet camera system was assembled. It consisted of 3 fisheye cameras that were fixed to a wooden board. The radiating orientation guarantees a 360° coverage of the environment at all time and the amount of data is still processible. In order to project 3D models to the camera images, the relative orientation between the cameras was determined and a vertex shader was developed to project the 3D models geometrically correct into the fisheye camera mapping geometry.

Estimation of an initial camera pose within a textureless building model

One big challenge for all augmented reality applications is the robust estimation of an initial camera pose that can be used for the subsequent camera tracking. In outdoor applications this can be achieved by using the GPS/GNSS sensor of the mobile device to get a coarse but absolute estimate of the position. In close-range indoor environments this possibility does not exist and different methods have to be developed. Since we can rely on multi-scale building models in this research group we developed methods to directly use those to get an initial pose.